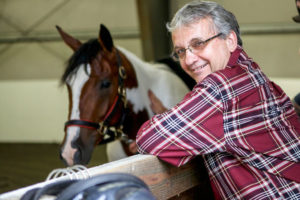 When Steve Cossingham founded National Field Representatives in 1989, he thought he was building a business. In that, he succeeded; three decades later, we’re left to wonder if his achievements surpassed even his optimistic expectations. Starting in a small hidden building behind a storefront in Windsor, Vermont, NFR grew to a large property preservation company that now boasts a workforce of hundreds in two states, and a national network of field contractors across the U.S. and Puerto Rico. Under Steve’s leadership, NFR became one of the most respected names in the industry, exemplifying excellence and integrity.

Significantly, Steve made NFR a family business. He invested an unprecedented amount of personal time and resources to every NFR employee. Their personal struggles were his struggles, their triumphs, his own. His confidence and faith in his staff was unwavering. The statement, “I can’t do this” was always met with an assertive, “Yes you can, now tell me how it’s going to get done.” NFR isn’t successful because Steve always desired excellence; it’s successful because he inspired that desire for excellence in others.

Some might consider NFR Steve’s legacy, but he’ll always be remembered first and foremost as a family man. He built a family in Newport and Claremont, New Hampshire. He built a family in Bradenton, Florida. He built a family of contractors across the US. Wherever Steve went, people were better and stronger for his presence. Whether donating time and resources to his local community, seeking to heal through the benefits of equestrian therapy, or lending an ear and a piece of sage advice, he was ready to assist people in need.

For those of us at NFR, Steve’s greatest legacy will always be his boundless capacity for love and kindness.

We believe that the quality of our work speaks for itself.  Contact us today to learn more about what makes NFR different or for an obligation-free demonstration of our web portal.